In the last blog post, we remarked that Amania-9 was the last circle that we announced back in June that we still haven’t released a doujinshi from. Since we sorted that out, we thought it might be time to announce a few more circles.

This time we only have three new circles to announce, so there will be no multiple blog posts spread over the entire week. We don’t want to waste your time, after all. However, we plan to release our first doujinshi from these 3 circles very soon, probably one of them already this week (obnoxious wink, wink, nudge, nudge), so keep an eye out. Without further ado, here are the announcements, in alphabetical order: END_OF_DOCUMENT_TOKEN_TO_BE_REPLACED

The last two blog posts were all about announcing new circles, but in out third and final summer announcements post, we’ll do something different.

We have a number of doujinshi in our pipeline that will be released later in the year. Up until now, we’ve normally announced a specific doujinshi a day or so before release. This has led to frequent question about whether we’ll be even publishing specific doujinshi or not. For the sake of transparency, we’ll list all doujinshi that we’re currently working on. To avoid unnecessary repetitions, we’ll omit the doujinshi from the circles that we have already announced in the last two blog posts.

Let us know what you think about this format!
In case you don’t care about any of this, we have a little surprise to make up for the time you’ve spent reading up until this point: in our first blog post in the series, we said that “no new doujinshi will be going up for sale this week”. Okay, but that doesn’t mean we can release one for free, does it?

We have here for you a short doujinshi from Muchakai, originally published as a CG set on pixiv. The title is “Chocolat Having a Bad Time During a Pr*tty Cure Show“. How bad of a time exactly, you might wonder… Well, you’ll just have to click here and find out for yourself. 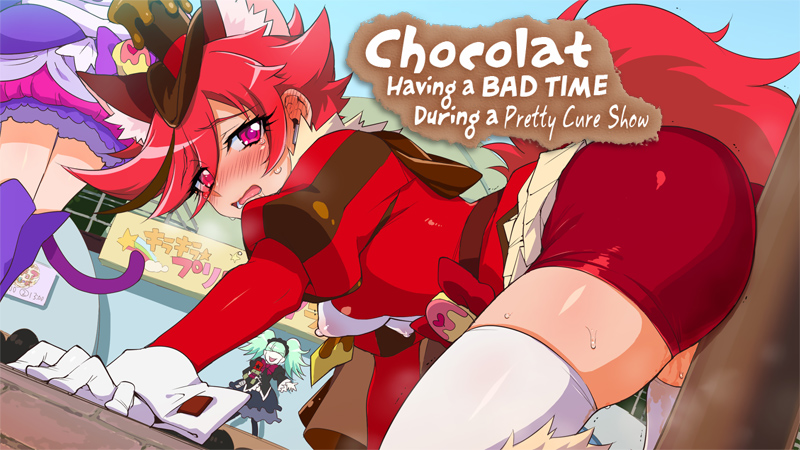 Now on with the list. One last note: the titles, if written, are subject to change. END_OF_DOCUMENT_TOKEN_TO_BE_REPLACED

In case you missed our previous blog post, you can read it here. We announced three new circles in that post, so make sure you didn’t miss it. Today we continue with the announcements. END_OF_DOCUMENT_TOKEN_TO_BE_REPLACED

Summer officially started last week so we thought it would be a good time to get the juices flowing. We made our last batch of announcements in February, when we announces 9 new circles. This time, we’re scaling back. We only have eight new circles to announce.

Also, there will be no new doujinshi going up for sale this week, but we might have a surprise for you instead. Stay tuned!

To keep the blog posts at a reasonable size, we’ll split the announcement in two part. To start of with, here are the first four circles whose works you’ll soon find on 2D Market: END_OF_DOCUMENT_TOKEN_TO_BE_REPLACED

Today’s blog post is the first (and hopefully not the last) about something we’ve been wanting to for a while now: going back and bringing our old releases up to our current standards. First doujinshi getting this treatment is one of our old favorites: Marcille Meshi by Asaki Blog Branch Office. END_OF_DOCUMENT_TOKEN_TO_BE_REPLACED

This was a very exciting weeks for us, as we have managed to announce NINE new circles only 4 months after our last batch of announcements in October. We also hope that you enjoyed this Week of Love too. We’ve released two new books for you and even gave a few of them away in our twitter giveaway. In case you missed it, you should look into following us on social media, as all of our giveaways tend to be there.

We’ll also use this opportunity to take a look back at 2017. In spite of the whole “2017 was horrible” meme, we’ve had it alright. We’ve experienced steady growth and are at a point where we can start thinking about expanding our theme and branching out. It there’s one word that could define 2017 for us, it would be “consistency”. Not to pat our own back, but we were able to maintain our self-imposed weekly release schedule for the entire year, barring the one-week long break on New Year’s. We hope you have enjoyed what we’ve produced and that you’ll keep giving us your support. END_OF_DOCUMENT_TOKEN_TO_BE_REPLACED

After a short break for Valentine’s Day (though those who grabbed any of the two doujinshi that we published yesterday are probably not feeling rested), it’s time to continue with the announcements. Today we have three more new circles to announce. END_OF_DOCUMENT_TOKEN_TO_BE_REPLACED

Today we continue with our Valentine’s Week of announcements. If you’ve missed the yesterday’s post, you can read it here. It’s worth it.

Without further ado, we have three more doujinshi circles to announce. END_OF_DOCUMENT_TOKEN_TO_BE_REPLACED

In case you weren’t aware, February 14 is the Valentine’s Day, the day of love. And while we have prepared a sweet present for you on that exact date, in form a double release of that sweet, sweet doujinshi, we will spend this entire week in a festive mood. Of course, remember that we sell R-18 doujinshi, so “festive mood” means we’ll be continually teasing you and keeping you on the edge. In practice, we’ll making a whole lot of new announcements.

Also, we don’t want to blow our load too early, or all once, so we’ll be spreading our announcements over the course of the week, starting today. A small teaser to keep you hot and bothered as read the rest of this post: doujinshi from one of the circles mentioned below will be released on Valentine’s Day. Have fun guessing which one.

(Keep in mind that the English doujinshi titles mentioned below are temp names. We reserve the right to inject puns into titles before release.) END_OF_DOCUMENT_TOKEN_TO_BE_REPLACED